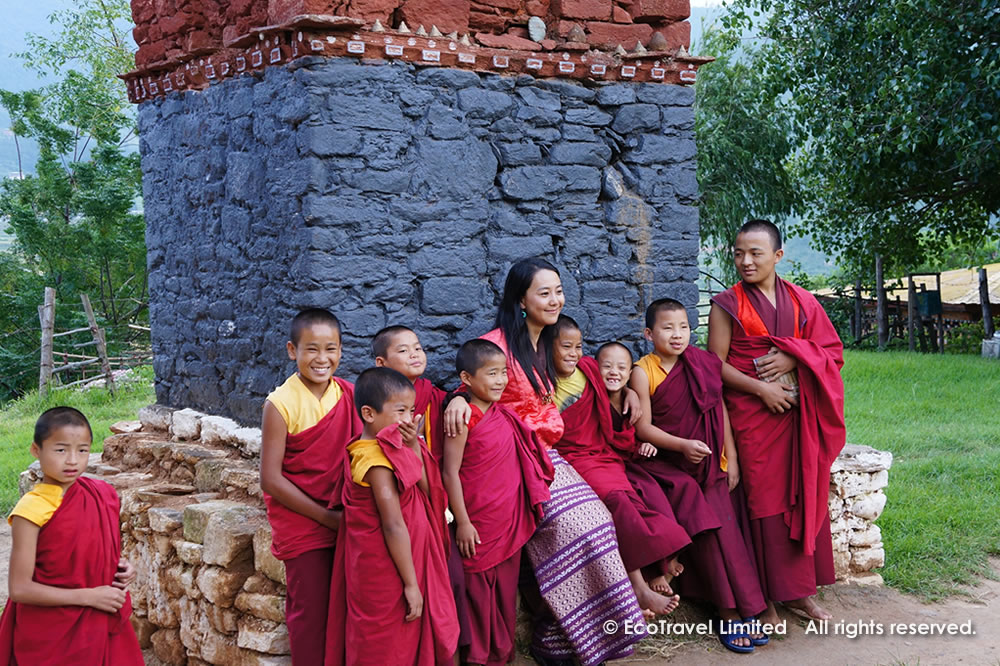 Abandoning the usual shortcut of high-speed economic development,
the Kingdom of Bhutan and its people weaved their dream of
happiness in a unique “Bhutan Way”.

Bhutan, the Himalayan kingdom, with its capital city in Thimphu, occupies an area 40 times that of Hong Kong, with only one tenth of the territory’s population. The wedding of the century of Hong Kong artists Tony Leung and Carina Lau in this secluded country in 2008 not only placed Bhutan under the limelight, it also aroused people’s curiosity and imagination of the small kingdom. In truth, Bhutan’s concept of “Gross National Happiness”, initiated in 2005, already attracted immense international interest. Bhutanese believe, “Material wealth and enjoyment are not paramount to a genuine quality life, rather, it is one’s spiritual development and adherence to it.”

The small Himalayan country is regarded as “poverty-stricken”. Yet 97% of the population consider themselves happy and these happy Bhutanese generously spread the joy to travelers from around the world.

As a measure to preserve tradition and culture, Bhutanese men and women are required to dress in the national costume in public. Men wear a knee-length button-less and pocket-less robe, knee-high socks and shoes. Belongings are carried in the pouch formed above the belt tied at the waist. Women wear an ankle-length three-piece outfit.

Bhutanese are unsophisticated, peaceful, kind-mannered and friendly. Though uncomfortable with tourists’ photo-taking requests, they will stop whatever activities they are engaged in to allow their pictures to be taken. Bhutanese kids are all the more passionate. It matters not if they were playing at roadside, journeying to school or returning home from school. Whenever they saw our coach pass by, they would wave frantically to us, instantly enlivened the group of strangers sitting inside. Bhutan’s religious architecture can be divided into two main categories. One of them is the monastery, where monks reside and learn their religious practices. The other, called “Dzong”, is where the ancient Bhutanese religious and political centre lies. The existence of “Dzong” shows the importance attached to religion and the king in Bhutan, as they both enjoy the same amount of political power and are equally revered by Bhutanese.

Paro Taktsang Monastery (Tiger’s Nest), the most sacred temple in Bhutan and a must-go tourist attraction, was built on a precipitous cliff, a strategically important spot. The slope is so steep legend has it that ancient sages mounted to the site on tiger’s back. Nowadays, visitors can choose to ascend the monastery on horseback. Led by the groom, visitors can traverse through the escalating path surrounded by thick green and lush pine trees to the “Tiger’s Nest”. The return journey can be taken on foot, trekking along the shaded and leafy forest trails. The entire trip takes approximately four hours.

Apart from temples, rows and rows of flapping prayer flags with sacred text printed on them is another noticeable sight in Bhutan. The five colors of the prayer flags: blue, white, red, green and yellow, represent the sky, water, fire, nature and land respectively. Despite Bhutan’s attempt to counterbalance globalization by developing at a leisurely rate, more and more three to four-storey modern buildings are quietly erecting in some major cities such as Punaka. Nonetheless, Bhutan still enjoys a 72% forest-laden land mass, topping Asia’s list. Owing to this reason, a complete ecosystem can be preserved. Our guide Thunder took us to stroll along the high-altitude Dochula Pass where we watched birds. The location offers a magnificent view of the primeval forest, comparable to Pandora forest in the movie Avatar. What is more, the forest is abundant in exotic flora and fauna, rare mushrooms and extraordinary wild birds.

Bhutan’s farmland is untouched by industrial development due to its low growth level. Electricity export, tourism and agriculture are the country’s three major industries. In October, a season when the rice ripens, visitors can enjoy the view of never-ending terraced fields covered by glistening gold color of ripen rice, a much sought-after photo opportunity by travelers. Traveling in Bhutan means you will eat a diet rich in vegetables. The mostly served dishes in restaurants are broccoli, black fungus and potatoes. In addition, spicy cheese, fried red peppers and red rice are the stable food for every meal. As devoted Buddhists, Bhutanese do not kill animals, thereby limiting the country’s local meat supply. Meat therefore relies mainly on imports from neighboring countries. Cattle in Bhutan are reared for farming and dairy products. Just like Bhutanese people, I guess cows and sheep here are also happier than their counterparts elsewhere.

Bhutanese, especially monks and the older generation, are avid areca nuts chewers. Bhutan’s areca nuts are made by wrapping an areca nut fruit with the leave of a plant called “Betel”, with a dash of lime. Areca nut chewing is alleged to be freshening and keeps the chewer’s body warm though it also turns one’s teeth and gums bright red after chewing. Focusing on short-term profits and efficiency, many developing countries ignore the importance of environmental conservation. In the pursuit of economic growth and tourism development, these countries compromise their environmental resources, traditions and cultures. Bhutan, sticking to the road less traveled, pioneered the “Low Volume, High Value” tourism concept. It limits the number of incoming travelers, stipulates that visa be issued through tour operators only; so is plane ticket purchase. “High Value” is assured by fixing a minimum daily tariff of USD 200 for each visitor. Instead of deterring travelers’ desire to visit, Bhutan saw an increase in high-quality visitors who are drawn to the mysterious kingdom for sightseeing, eco-travel and hiking adventure.

I am earnestly looking forward to seeing the same quaint and charming Bhutan in 10 years, demonstrating to the 21st century civilization her commitment and extraordinary achievement in sustainable development of tourism.